Pitt to Play in Pinstripe Bowl

After persevering through a tough schedule, Pittsburgh heads to the “Big Apple” to play Northwestern in the Pinstripe Bowl at the renowned Yankee Stadium. On December 28, the Panthers will attempt to cap off on what was a fairly positive season.

In review, Pitt had a lot of ups and downs. The revival of the once storied rivalry was alive and well in college football’s second week. The Panthers bested the top-ten Penn State Nittany Lions with the help of James Conner’s 117 yards of rushing and a touchdown. Conner rebounded from his own personal battle of cancer and his story inspired not only Pittsburgh, but on a national scale.

Aside from their blowout handed by Miami, Pitt’s other three losses were within one possession. Two of losses were against teams who are currently ranked (No. 13 Oklahoma State & No. 18 Virginia Tech). Frankly, that’s what was disappointing of Narduzzi’s Panthers this year. They weren’t able to finish. Pitt’s secondary against the Hokies was second-rate and they struggled right from the start. Quarterback, Nathan Peterman kept the game close along with the rest of the offense, but they just couldn’t finish. A few tweaks and a couple touchdowns and your Pitt Panthers would be playing in a far better postseason matchup.

The highlight of the season was knocking off the No. 2 Clemson Tigers in a thriller. Everything was coming together that night. Defense made a big stop on fourth down to get an opportunity to win and then Chris Blewitt pulled through. His 48-yard field goal was just enough in what was Pitt’s biggest upset since their unforgettable win over No. 2 West Virginia in 2007. This was the big turning point in the bowl game conversation. Pitt won their last two games and were finally ranked. However, fans felt that Pitt was snubbed and deserves to play in a more suitable bowl game or perhaps a more suitable opponent.

Pittsburgh season-ticket holder Brian Venturella, was rather thorough in his defense of the Panthers. “First of all, the team is way better than their record indicates. Three of their four losses were in the final minutes or seconds, and by the time the Miami game came around, the team had an off day and lacked motivation. If you look in our win column, Pitt is the only team to have a win vs. two different top-five teams and beat two power five` conference champions. I believe Pitt is the best 8-4 team in the country, maybe besides Auburn.

Venturella believes Pitt should be flying to Florida and not New York. “‘…take into account that Pitt could/should be be playing against West Virginia in the Russell Athletic Bowl which would be one of the top five bowl games this postseason.”

He concluded by stating, “It is all about the money and I guess they could get more Pittsburgh fans to New York and more Miami fans to Orlando.”

The Panthers look to conclude their season on a good note and hoist the George M. Steinbrenner trophy in the Bronx. 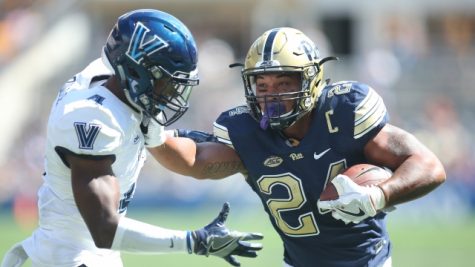